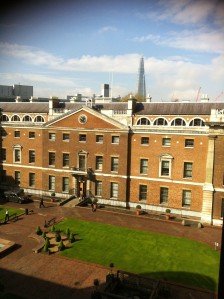 While leading a course for Aslib last week at the Etc. venues training centre near the Tower of London last week, I was struck by the view out of the window; which, I’m glad to say, the participants were polite enough not to stare at. In the foreground, Robert Smirke’s Royal Mint building of 1809, with the nearly completed, and rather controversial, Shard building at London Bridge appearing behind it, as an apparition of the future. Very London.

And a nice metaphor for the renaissance of Aslib. Founded in 1924 as the Association of Special Libraries and Information Bureaux, gone through some hard times recently (as have many of our long-standing professional associations), and emerged revived as part of the Emerald publishing family. Its early history is recounted in an article by David Muddiman, and it played a major part in the development of the ‘British school’ of information science. We too often forget that our discipline has an important past, like the venues in which we find ourselves.