Readers of this blog will know that one of my interests is the links there may be between conceptions of information in different domains; see the Mind the Gap paper by myself and Lyn Robinson. 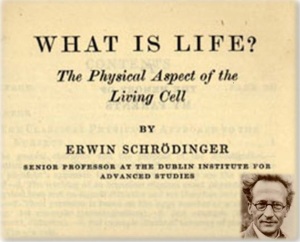 Of course, we know that all of biology is information-centric today, because of the importance of bioinformatics and data processing in all aspects of biological research. But what I am looking at now is something rather different; the idea of information itself as a fundamental feature of living systems. This is generally considered to have begun with Erwin Schrödinger’s 1944 book What is life?, and has been an increasing source of contention ever since.

In looking at developments over the last year or two, most attention seems to have been focused on the invocation of ideas of information as a solution to the problem of explaining consciousness: what it is, how it arises, and how widespread it is in nature. The integrated information theory (ITI), originally propounded by Giulio Tononi, sees consciousness as a natural feature of any network of information processing, with a sufficient amount of complexity of the right sort, such that the system can be influenced by its past and influence its future. Consciousness, in this account, is what information feels like when processed in certain ways. Intriguingly, this theory suggests that consciousness is not binary – something is conscious or it is not, but rather a matter of degree; any system with the right sort of information processing network will have at least a little bit of consciousness. This is highly controversial, and smacks of panpsychism, the idea that mind and awareness infuse the whole cosmos. An informal summary of ITI, with some thoughts as to how it might be tested, is given in an article in Quanta magazine in March 2019.

ITI is associated with a more general idea, developed by Erik Hoel, a PhD student with Tononi, that information may play a crucial part in causal emergence, by which macroscopic features of systems are just as real, and better able to explain the world, as their microscopic components. Someone’s behaviour may be better accounted for by their beliefs and their desires, than by the states of the atoms of which their brains are composed; but this is difficult to explain in terms of reductionist science. If causal emergence works in this sense, it may be applicable to the physical as well as the biological domain; an accessible introduction is again given in a Quanta article.

Coming from the other direction, there is an increasing interest in the idea that the application of information theory within physics may be fruitful way of understanding the nature of life, and how the boundary between non-living and living is crossed, an idea originating with Schrödinger. Paul Davies, a well-known writer on the topic, gave a brief summary in a Guardian article in January 2019, focusing on the idea that understanding how information couples to matter and makes a difference in the world will require a new form of physics. This. in his view, could move science towards the unification of the physical and biological sciences around the concept of information; the ‘great revolution’ of Davies’ title.

Specific examples of this approach are the finding that biological cells, during their development, appear carry out a form of optimal information processing, and the establishment of a new formal definition for meaningful, semantic, information, applicable to any living creature.


Finally, a continuing interest among biologists has been the extent to which other species carry out what might be called ‘information tasks’, analogous to human information behaviour. It has been suggested in a number of cases that creatures of various kinds may use an exosomatic memory device, as humans might use a to-do list or notebook. The latest idea of this kind is that spiders may use their webs as a device for extending their memory; processing and simplifying information.

Whether these developments applying information theories within biology have anything, other than general interest, to offer LIS is a moot point. My own view is that they do. If there is a potential for the physical and biological sciences to be united around the concept of information, then surely the same potential exists for the social sciences. This is particularly so when the concept of meaningful information is being extended outside the human context. The information disciplines surely have much to learn from each other.