A recent article, originally appearing on an Australian radio website and widely republished, celebrated the 16th anniversary of Wikipedia, suggested that traditional encyclopaedias were now worthless, as Wikipedia completed the process of organising knowledge begun by the Romans.

Well, up to a point. Wikipedia, however widely used it may be, is not the only online encyclopaedia in town. And it is interesting to compare Wikipedia with one of them, which might be considered its polar opposite: the Stanford Encyclopaedia of Philosophy (SEP). What is intriguing about this is that the two sources are different in many respects, and united only in their status as free to use online sources, each very popularity with their user groups.

First and foremost, of course, there is their scope. Wikipedia is general, SEP is subject-specific. I think it would be good if those us who are old enough the world before Wikipedia took a moment from time to time to reflect on the fact that we now an immediately accessible online source that gives us information on pretty much anything. I can recall that when I first gave a course on information resources I set the student a set of reference query exercises which varied from the ‘hard’ to the ‘almost impossible unless you know the answer in the first place’. Today, with Wikipedia, most, though not all, of them would be trivial. This sea-change in access to information across the spectrum, and its implications, is not always given enough credit. But, precisely because of its universal scope, Wikipedia encounters problems which are much less likely to be faced by a resource or more limited scope, as we see later. In particular, when the scope is closely defined, it is easier to control consistency and accuracy.

Having said that, the SEP covers a pretty wide variety of topics. I would not have immediately associated translating and interpreting, pacifism, republicanism, multiculturalism, friendship, marriage, molecular biology, sounds, or voting methods with philosophy, but they all have entries in the SEP.

As for the funding which allows free access to the sources, the SEP has an array of rather traditional forms of support for an academic endeavour: support from an institution, grants from philanthropic institutions, and an open access model providing added-value features for a fee. Funding for Wikipedia, and its supporting Wikimedia Foundation, comes largely from small donations from individual users – appeals funding from its users appear annually on Wikipedia – with some support from philanthropic donors.

Perhaps the most striking difference between the two encyclopaedias is the way in which each is created and edited. In the SEP, all articles are attributed to named individuals, and control is exercised by a board of named editors, according to the traditional model of the academic encyclopaedia. By contrast, Wikipedia articles are anonymous, and may be created and edited by any user. Control is exercised by a body of volunteer editors, who are typically identified only by an uninformative user name, and overall policy decisions are taken by a smaller group of elite editors. Concerns have been expressed about the make-up of the Wikipedia controlling group: 94% of Wikipedia’s active editors are male, with limited geographic diversity, Africa and Central Asia in particular being very underrepresented.

Wikipedia entries may be amended frequently; such amendments, their dates, and any reasons and discussion, can be found only by looking on talk pages, ‘behind’ the entry itself. SEP entries are amended only infrequently; the dates of the original entry and of subsequent revisions are shown on the main page. Whereas Wikipedia notes that it is a continually improving ‘work in progress’, with entries at different stages of development, SEP entries are all of a consistent standard, and unfinished material does not appear. This difference in consistency also applies to what topics are covered: in the SEP, a balanced coverage is promoted by the editorial board, while in Wikipedia coverage of topics depends solely on the interests of the contributors. And also to how the topics are covered: nothing would be published in the SEP if it were not broadly in line with the source’s standards of scope and depth, while in Wikipedia great variation can be seen, even among articles on very similar topics.

Finally, the approach to supporting articles with citations differs considerably. All SEP entries are fully referenced. Wikipedia asks for supporting citations, but many entries lack these, and are noted accordingly by the Wikipedia editors. This is one aspect in which librarians have been very active in trying to improve Wikipedia, through initiatives such as #1Lib1Ref, and it generally agreed that this aspect of Wikipedia is improving, as I was reminded in a recent Twitter exchange. 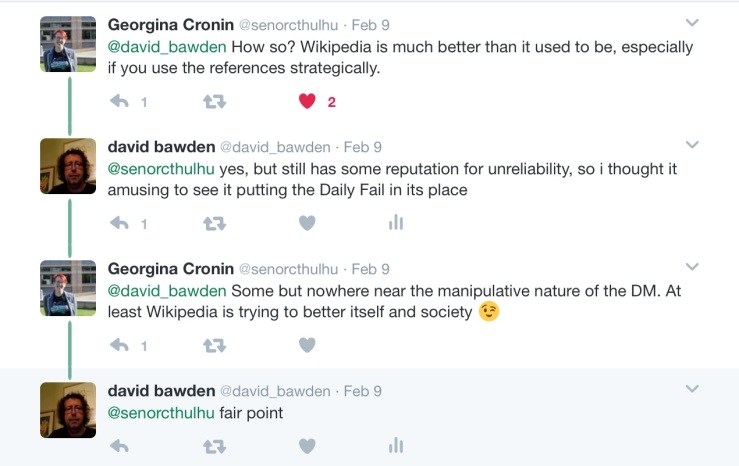 So, in both cases it may be argued that quality is ensured by the encyclopaedia community; but the way this works out in practice is very different, the identifiable individual taking a much more prominent role in the SEP. And because of the process of creation and maintenance, consistency in much higher in the SEP.

The nature of the expertise of the creators is also very different in the two resources. The SEP relies on the justified expertise of its contributors and editors, whose academic status is publicly stated. Wikipedia relies rather on the communal expertise of its user groups, and its editors in particular. This is not to say that there is not considerable expertise involved in Wikipedia. On the contrary, one hears anecdotally that particular entries and sections are created and updated by expert individuals and institutions; but such expertise is not identified and foregrounded in the way that it is in the SEP. Indeed, Wikipedia explicitly states that “what is contributed is more important than the expertise or qualifications of the contributor”.

This leads directly to issues of validity of information, of misinformation and disinformation, which have nagged at Wikipedia since its inception. Apart from the fear of errors being inadvertently introduced by inexpert editors, Wikipedia was being accused of harbouring deliberately false information long before ‘alternative facts’ became a thing, This was largely a matter of individuals or organisations improving their own story, or degrading that of opponents.

Then there are the hoaxes and April Fool pranks, all of which Wikipedia commendably tries to identify and list. [Some of them seem too good to be hoaxes: I think that the BBC really should have made a series of two of Olimar the Wonder Cat, just to keep the record straight.] SEP does not have hoaxes; or, if it does, no one has found them yet.

This is not to say that Wikipedia is careless of misinformation and disinformation. On the contrary, its editors are assiduous, if somewhat inconsistent, in rooting it out. It caused some ironic amusement to see the Daily Mail newspaper voted as a deprecated source by Wikipedia’s editors because of its poor fact-checking and sometimes outright falsification; both accusations which have been levelled at Wikipedia in the past, because of its assumption that, whatever erroneous material might appear would be corrected by the community. Numerous studies of the accuracy of Wikipedia over the years have led to little more of a conclusion that it all depends which bits you look at, and that it is generally improving. Fine for general interest purposes, but for something really important maybe we’d prefer something like the SEP.

Of course, it would be wrong to set these two sources up in some sort of opposition. Those who use the SEP for philosophical topics, no doubt use Wikipedia for other things. And there is no harm, for someone interested in philosophical topics, in having a look in Wikipedia to see if there’s an alternative viewpoint to SEP on your subject of interest; though personally I’d be cautious in reading too much into it if there is. And, for all its faults, the Wikipedia approach, with its inconsistencies and continual ‘work in progress’ status, is no doubt the only way of achieving such a comprehensive collection of information.

A recent article in Quartz online magazine claimed that the SEP has “achieved what Wikipedia can only dream of”, in providing rigorously accurate free online information. The comparison may not be a fair one, but it will be interesting whether Wikipedia, with the help of enthusiasts in the library community in collaboration, moves in the SEP direction. Or whether, as Jutta Haider and Olof Sundin suggested in a thoughtful article seven years ago, Wikipedia is indeed firmly in the tradition of the Enlightenment encyclopaedic tradition, updated for the network age; in which case, perhaps it will be the model for the future.